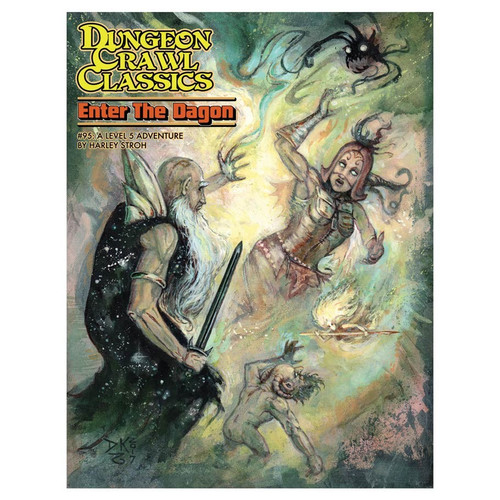 A level 5 adventure for DCC RPG. The Isle of Dragon: to common folk, it presages death, pestilence and woe. To warlocks, witches and wizards, the isle offers a wealth of occult power, forbidden knowledge, and spells beyond the ken of mortal man. But before you can lay claim to the island's secrets, first you must survive its fabled spell duels – a series of death matches where only one caster may reign supreme. Wizards and elves will be tested to the fullest of their abilities. To triumph, parties must also survive the machinations of the other contenders and their wicked retinues. For when vying for the title of Master of Dragon, and battling against some of the most powerful sorcerers to tread the Known Worlds, you will need every advantage you can glean.

Will you and your companions sit passively by, awaiting whatever fate befalls you? Or will you take the fight to your foes? And when your life – and those of your companions – hangs on the casting of a single spell, will you have the courage to accept Dragon's challenge? The time for questioning has passed. Black-sailed ships have come to ferry you and your companions to the fabled death matches. It is time to Enter the Dragon.
×